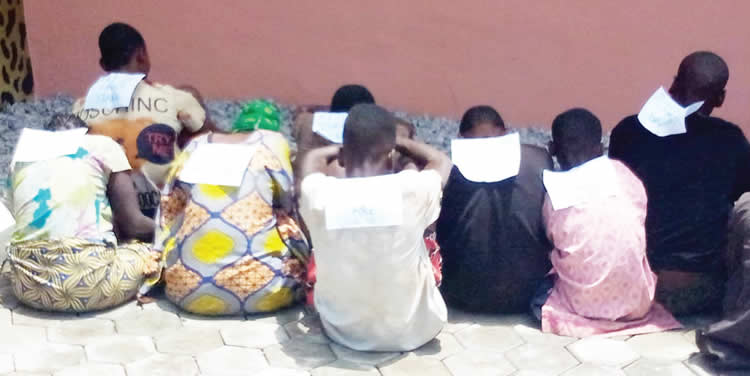 Among the suspects were two teenagers, Timilehin (12), aka Anini, and Sunday (16), aka Oyenusi; and 20-year-old Odeyemi Ayodele, aka Osumbo.

Anini, Oyenusi and Osumbo were hardened criminals who were killed by firing squad during the military era.

Timilehin, Sunday and Ayodele were arrested for robbery at Ijare community in the Ifedore Local Government Area of Ondo State.

Parading the suspects on Thursday at the command headquarters in Akure, the state capital, the Commander of the corps, Adetunji Adeyeye, said the three boys specialised in armed robbery.

According to the Amotekun boss, apart from the trio, 16 other suspects were apprehended for various criminal activities such as kidnapping, rape, stealing, and open grazing, among others.

Adeyeye said, “One of the three juveniles (Oyenusi) was arrested last year, taken to a rehabilitation centre and was later released because of his age.

“His mother was arrested too because ‘Oyenusi’ confessed to us that his mother was the one preparing charms for him to prevent his downfall and arrest by security agents and his mother has been a beneficiary of the crime proceeds.

“This time around, we will write to the state Ministry of Justice for possible advice on what to do about them. But for their mothers, who have been aiding them, they will be charged to court.”

Recovered from the suspects were guns, bullets, phones and money.

Adeyeye said the suspects had confessed to the crime and would be charged to court.

Speaking, the mother of 12-year-old Timilehin, Iyabo, said her son was influenced by Sunday (Oyenusi).

“I never prepared concoctions for him. I only went to church where my pastor gave me soap. I took him to a river where I bathed him with it for the spirit of criminality to leave him,” she added.

Meanwhile, Ondo State workers, under the auspicious of the Joint Negotiating Council of the Nigerian Labour Congress and the Trade Union Congress, have donated 30 motorcycles to the corps.

Reacting to the gesture, Adeyeye said the donation would assist his men to do more in protecting the people of the state.