He also gave more than $700million in gifts to health causes ranging from a $270million grant to improve public healthcare in Vietnam to a $176million gift to the Global Brain Health Institute at the University of California, San Francisco.

One of his final gifts was a $350million donation for Cornell to build a technology campus on New York City’s Roosevelt Island.

Feeney pioneered the idea of Giving While Living, the idea to spend fortunes on big charitable donations during one's lifetime instead of creating a foundation upon death.

'We learned a lot. We would do some things differently, but I am very satisfied. I feel very good about completing this on my watch,' Feeney said to Forbes.

'My thank to all who joined us on this journey. And to those wondering bout Giving While Living: try it, you’ll like it.'

In 2012 Feeney said he set aside $2million for his and his wife’s retirement with plans to donate the rest.

Feeney isn’t one to boast and gave much of his money away anonymously, giving way to the nickname the 'James Bond of Philanthropy'.

Through Atlantic Philanthropies, which he founded in 1984, he’s given to efforts to bring peace to Northern Ireland, modernized Vietnam’s health care system, and focused on expanding education.

'I see little reason to delay giving when so much good can be achieved through supporting worthwhile causes. Besides, it's a lot more fun to give while you live than give while you're dead,' he said last year.

On September 14, 2020 Feeney completed his four-decade mission and signed the documents to dissolve Atlantic Philanthropies.

Feeney and his wife Helga Feeney celebrated with a ceremony over Zoom with the foundation’s board that included video messages from Bill Gates and former California Governor Jerry Brown. 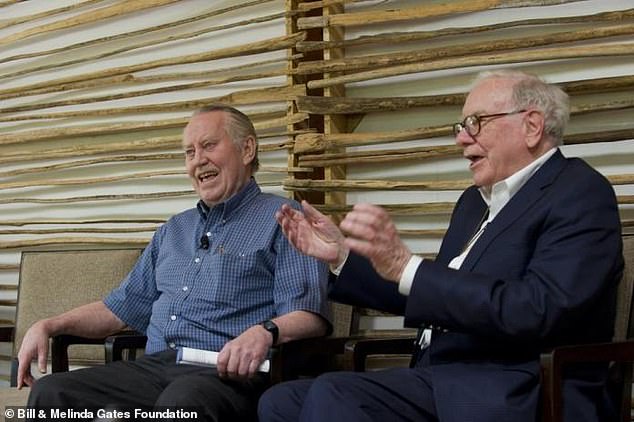 Chuck was a cornerstone in terms of inspiration for the Giving Pledge,' Warren Buffett said. 'He's a model for us all. It's going to take me 12 years after my death to get done what he's doing within his lifetime.' Feeney left and Warren Buffett right

Speaker of the House Nancy Pelosi also sent an official letter from Congress thanking him for his life’s work.

Atlantic Philanthropies, at the height of its work, had more than 300 employees and 10 global offices working across seven times zones.

The closure date was set years in advance as a part of Feeney’s long-term plan to make high-risk, high-impact donations with a hard deadline.

Today the businessman lives in a modest apartment in San Francisco with a plaque that says 'Congratulations to Chuck Feeney for $8billion of philanthropic giving'.

In fact, it was his generosity that influenced Bill Gates and Warren Buffett in launching the Giving Pledge in 2010 – a campaign for the world’s wealthy to give away at least half their fortunes before death. 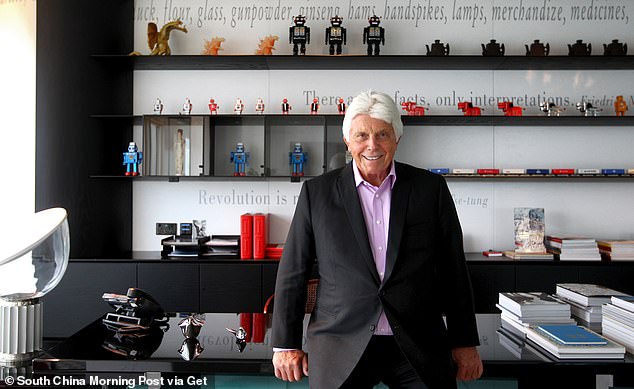 'Chuck was a cornerstone in terms of inspiration for the Giving Pledge,' Warren Buffett said. 'He's a model for us all. It's going to take me 12 years after my death to get done what he's doing within his lifetime.'

'Chuck created a path for other philanthropists to follow. I remember meeting him before starting the Giving Pledge. He told me we should encourage people not to give just 50 percent but as much as possible during their lifetime. No one is a better example of that than Chuck. Many people talk to me about how he inspired them. It is truly amazing,' Bill Gates said.

'Chuck took giving to a bigger extreme than anyone. There’s a lot of rich people, very few of them fly coach. He never spent the money on himself and gave everything away. A lot of people are now understanding the importance of giving it away, and the importance of being involved in the things you give your money to,' Sandy Weill, the former Chairman of Weill Cornell Medicine, said.