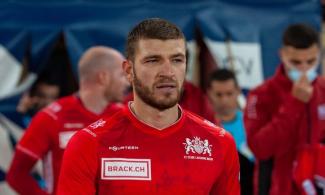 The 27-year-old former Swiss international footballer was found dead in front of his home in the city of Mostar which is 45 miles South of Sarajevo.

Switzerland’s former midfielder, Karim Gazzetta has reportedly committed suicide at his home in Bosnia and Herzergovina by jumping from a building in the early hours of Monday.

Mirror UK reports that the 27-year-old former Swiss international footballer was found dead in front of his home in the city of Mostar which is 45 miles South of Sarajevo.

Gazzetta had signed for local team Zrinjski, the reigning Bosnian champions, in the summer but was restricted to two appearances due to injuries.

His first club, Servette, in a statement quoted by Mirror UK said that "The Servettienne family mourns today the disappearance of Karim Gazzetta, child of the club. To his loved ones, his family, we send our most sincere condolences and our support. Rest in peace Karim."

Further reports stated that the attacking midfielder was once tipped for the very top and appeared for the Swiss at every level up to Under-20 but had experienced continuous injury problems.

Lausanne in their tribute said, "The Swiss football family is in mourning. It is with great sadness that we learned of the death of Karim Gazzetta. The LS presents its most sincere condolences to all of his family and loved ones."

"The Swiss Football League mourns the loss of former U20 international Karim Gazzetta, who tragically passed away in Bosnia. Most recently, at the age of 27, he was under contract with the Bosnian league leaders Zrinjski Mostar.

"The SFL expresses its deepest condolences to the entire family and loved ones, especially his younger brother Luca, who made three appearances in the Challenge League for Servette FC in the 2017/18 season and is currently playing in the Promotion League for Stade Nyonnais,” the spokesman for the Swiss Football League added.

Meanwhile, the Bosnia police said an investigation is ongoing.